My new novel is published: zONE: The End and the Beginning

Book One in the zONE series: The End and the Beginning 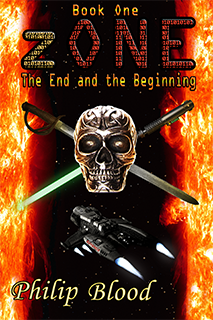 The End and the Beginning takes place around thirty years from now.  First off, think about what has happened to technology in the last thirty-some years?  Let's take a quick trip back.  It's 2014, so if we subtract thirty years, we would be 1984, George Orwell's year.  Personal computers were just starting to get into a few homes, and were at the basic level of the Apple IIe, with green screen monitor, there were no cell phones and no Internet.  Imagine that (or if you're older, think back to that time).

In just thirty short years we went from the Apple IIe to where we are today with the Internet, Cell phones and computers in, well, just about everything.  I think there are toasters with computers more powerful than the original Apple II.

How about politics?  Remember the Cold War between the U.S. and Russia?  In 1984, thirty years ago, Ronald Reagan made the gaffe while joking with a live mic where he said, "My fellow Americans, I'm pleased to tell you today that I've signed legislation that will outlaw Russia forever.  We begin bombing in five minutes."  Only seven years later, that same Super Power, The Union of Soviet Socialist Republics (USSR) formally ceased to exist on the 26th of December, 1991.

A lot can happen in thirty years.

And so, in my novel, zONE, subtitled, The End and the Beginning, a LOT has changed in the next thirty years.  The Internet is dead, cell phones are gone, and it was all changed by a new technology called the Zones.  The Zones are a virtual reality where they can create any environment, story, world, or even universe.  When you go in, you feel like you are in a real place.  Every famous book, movie, time period, historical setting, etc. have been recreated into Zones where you can actually go there and experience it as a living person.  In the Zones you are a Puppeteer, or 'Teer', controlling a Puppet.  What this really means is that you get a new body, of your choosing, and you travel through these worlds as that person.

You can go, do or be anything or anyone you want, and it all seems real.

Not only that, but there have been sweeping changes to the political landscape as well, there is no more United Nations, in fact, there are no nations.  There is just one world government, run by a company called Zcerebral, Inc., the company that created, and owns the secret to running the Zones.

zONE is told in First Person from the mind of the lead character, T.C. Hamilton.  The problem is, he has lost some of his memories, but not all of them.  There are just big gaps.  He is the most wanted man on Earth, and in the Zones, he is a Pirate.  Pirates are like Hackers, but these are the very few who are on the top 50 wanted list.  These are people who have figured out how to create and sail their sculpted spaceship through zSpace and illegally enter any Zone.

As the reader you get to ride along with T.C. on his adventures through an Earth run by the iron fist of a new totalitarian government, who use the bodies of their own citizens as zombie bodies for their operatives to commandeer.  If T.C. is caught before he can discover why he is the most wanted person, then his body will be donated to the Zombies, the zPol police force.

But there is much much more to this onion than just why T.C. is wanted, and he will have to travel through the various story world, like Wonderland, Hyperborea, The Jungle Book, and through other famous people's worlds, like the Harrison Zone, the Roddenberry Zone, the Lucas Zone, the Rowling Zone or the Tolkien Zone in order to find the answers, and solve a great mystery.

I had a lot of fun with this and got to pay a lot of respect to authors, directors, screenwriters, and artists of many kinds in this novel.  This was a challenge in some ways because of copyright laws.   Fortunately, due to the 'Fair Use' I can mention authors or titles of other works, which I do.  I stay away from their stories, characters and other copyrighted information.  This means a certain amount of dancing around, unfortunately, but it is their work and their rights should be protected.  However, zONE pays homage to these works without infringing on their rights.

In the case of stories in the public domain, I had a lot more freedom, like Alice in Wonderland, or The Jungle Book.  I was also able to use some of my own previous novels as worlds and did so simply because I knew I could without getting sued.  :)

There are many references throughout the book to other famous works, and this is an integral part of the story, as you will find out before the end, or was that the beginning?

As for what kind of Science Fiction, well, that's hard to pin down.  It has some science to it, though I wouldn't call it hard science fiction, and it has some fantasy to it, but I wouldn't call it fantasy.  This is mainly an adventure, with some romance and humor mixed into the science fiction.  As with all my novels, the most important part of it was to be entertaining.  It's a fun look at what might be, and what would happen if there were such things as the Zones.

I invite you to read or listen to the book and remember that, as with all my novels, not everything is as it seems.  Please find zONE: The End and the Beginning at his link.on Amazon.  Most importantly, if you enjoy the story you can really help me out by posting a review.  I've found that good reviews go further to spreading a book than anything else on the Internet (or in the Zones).  :)


Posted by Philip Blood Blog at 9:18 AM No comments: