The final book in the zONE series published!


zONE: Brethren of the Ark finished!

OK, so zONE was supposed to be a standalone book and then I went and had an epiphany (while asleep one night) and woke up with a sequel all stuffed into my head.  However, when I finished that monster of a book (about 1,000 pages).  A third story came drifting into my brain while I was writing that second installment of the zONE saga.  I couldn't possibly include this in the second book, which was already very large!  So, I wrote an outline and stuck it in my 'get to you later' book folder.

Well, after I finished writing Magnus of Niburu, I decided to take a break from the ten novel, The Archimage Wars, series and write something else... so I opened that folder and took a look at book 3, for zONE.  Now, about 600 pages later, I finished writing Brethern of the Ark.

It is now available at ebook sellers everywhere, here: Brethren of the Ark

The paperback version should be out in about a day as well, on Amazon.

This novel concludes the zONE trilogy (no, really, it does). 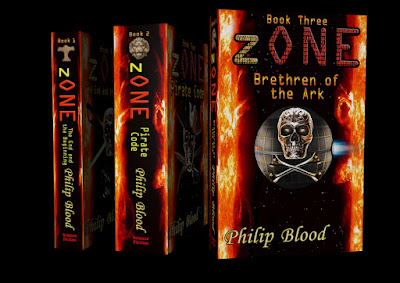 Posted by Philip Blood Blog at 7:18 AM No comments: