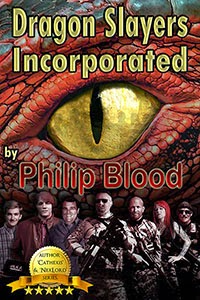 This is my ninth published novel (tenth book), however, in many ways, it is the oldest novel that I have published.  I came up with the idea for the story over 30 years ago, and even wrote some of the first few chapters back then (though I have heavily re-written them now).

Let me start with where the story came from.  I used to do a lot of GMing for Dungeons and Dragons back in my wild youth.  In fact, I had one group that got together every week for five years, playing through one epic story.  Along the way, they named their group, Dragon Slayers, Incorporated (and yes, T-Shirts were made, I still have mine).

Now, role-playing tabletop games are meant to have the players, well, role-play.  This means that they should act like they are actually people existing in the time and world on which the game takes place, without knowledge of modern technology or pop-culture.  My DSI team really didn't do a lot of role-playing, they were more like a group of teenagers from our time tossed into a fantasy world.  Of course, tabletop gaming is meant to be whatever you want it to be, so it isn't like they were ‘breaking the rules’ or anything, and they accomplished the most important element of that gaming, they had fun.

In fact, our games were more about comedy than story most of the time.  I remember one time when I asked Colin Morgan what his character had on him, after he pulled out a 50’ foot rope, tied it to a ten-foot pole, used a hammer and spikes to attach it to a wall, and a pulley to slide down the rope.  I checked his character sheet and found he had something like fifteen 50’ ropes, six suits of armor, twenty 10’ poles, and much MUCH more.  I made him draw a picture of himself, where he had to put everything he was carrying in the image.  There was this little person, and a giant sack the size of a Greyhound bus.  Santa Claus would have been envious!

But there were many other funny moments, like when one of our team learned how to move his body through solid stone, then he ran into a giant stone golem.  So, instead of fighting him, as I had planned, he went inside the stone of the golem’s body, moved up to the head, and stuck his arm and weapon out, and preceded to smack the golem in the head, from inside its head.  This is not standard fantasy battle stuff, but it was funny.

So, I got the idea to write a story about a company from our time, called Dragon Slayers, Incorporated.  The name meant that even though dragons are mythical if you pay them enough, they will slay your dragon.  In other words, a company that claims they would take on the impossible for the right fee.

This company is then approached by an old man who wants them to do something clearly impossible and meets the price they placed.  The send a team, expecting this guy is a nut case, and end up being transported, in their Chevy Van, with all their modern equipment, to the fantasy world of Zot.

This novel is about what a modern group of problem solvers does when stranded in a wacky and crazy fantasy world.  And, just like my group of players, this is a comedic look at the outcome, not anything too serious.  The story also pokes fun at many fantasy clichés, even things I have used in my own epic fantasy series, as well as doing parodies of things from Lord of the Rings, Conan, and many other fantasy works.
It is all meant to be in fun.

Finally, because the idea came from a group of friends of mine, I decided to base ALL the major characters (and many of the minor) on those friends and family.  They are called by their name, and may (or may not) have some real elements about those people.  However, as I warned all of them, these are characters, and they aren't really those people.  I took as many liberties with them as I pleased, after all, this is a comedy!