Now available in ebook or audioplay! 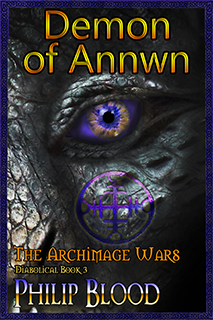 The series now continues the adventures of our hero (?) Nicholas Albus, in the third novel in the series, Demon of Annwn.  If you thought Atlantis was a strange world, then wait until you follow the misadventures of the outrageous wizard, Nicholas, and friends when they go to the bizarre world called Annwn!

Like Wizard of Abal and Sorceress of Atlantis, not only is there a written novel, there is also a full audio play available.  The ebook and audio plays are available at Amazon, which you can find, here: Demon of Annwn.

If you don't know about the series, you can start with the ebook, Wizard of Abal, for free, just go to Amazon, here: Wizard of Abal, if you already read that, and need the second book, you can get it here: Sorceress of Atlantis.  Those same links will get you to the audio play versions as well.
.
I'm hard at work on the next book in the series, which is scheduled for release very soon!  Book 4, Seeress of Yaochi is finished, but my team of voice actors are still working on the audio play version.
Posted by Philip Blood Blog at 8:41 AM No comments:

Sorceress of Atlantis, book 3 in the Archimage Wars!

It's out, and available everywhere!
The Archimage Wars
Book 2
Sorceress of Atlantis 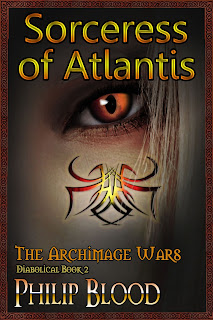 Following up on the first novel, Wizard of Abal, this second book in the series continues the adventures of Nicholas, the wizard who lost his memories.  The mysterious surrounding Nick are only getting stranger, as he now has to go back to Earth (yes, the Earth you THINK you know, but you don't) and after some crazy mage hunters, Dokkalfar Necromancers and other hell-bent on his destruction, creatures, he is off to yet another world, a fantasy planet called Atlantis.

Like Wizard of Abal, not only is there a written novel, there is also a full audio play.  The book is available at all the major ebook sellers (Barnes & Noble, Amazon, Kobo, Smashwords,  iTunes, etc., and the Audio Play is available from Audible, Amazon, and iTunes.

If you don't know about the series, you can start with the novel, Wizard of Abal, for free, just go to Smashwords, here: Wizard of Abal, if you already read that, and need the second book, you can get it here: Sorceress of Atlantis
.
Audiobook fans!  These are not just your standard audiobooks, read by one person, they are done by a full cast of characters, making it easier to follow who is talking, and you get women playing, women and men playing men!  There are also some sound effects and ambient background sounds where appropriate, making these full Audio Plays.  You can find the Audio plays at the same links (above).

Come join Nick, a different kind of hero, a guy with no patience, little self-control, and a mouth which gets him in SO MUCH trouble, on a crazy adventure across multiple fantasy worlds as he tries to find out WHY the evilest bastard on ten planets is after him, and he can't remember why.  He and his sorceress girlfriend, whom he also doesn't recall, a wizard tourist lush, an honor-bound, knife-wielding mage, and a bloodthirsty mind warped killer, join forces on this crazy adventure.  It's going to be a doozy!

I'm hard at work on the next book in the series, which is scheduled for release November 1st!  The novel is finished, but we're working on the Audio Play version.
Posted by Philip Blood Blog at 8:23 AM No comments: 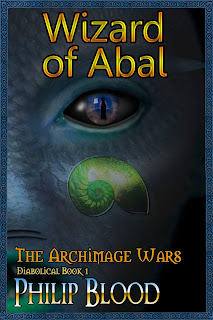 I just published the first novel in my new series, The Archimage Wars, on May 1st, 2016.  It is ABSOLUTELY free to read if you download it from Amazon.  Here is a link: Wizard of Abal

This novel is a bit different... the lead character starts out a bit rough and kind of an anti-hero, but he is on a journey of discovery, so stick with him, it will be worth the trip, I promise!

This is for the ebook and audio play, though there will be a print version of the book available eventually.

This is a big series, with ten books planned, but you can test out the first novel right now... for free.

I hope you enjoy the first novel in this new series.  Please sign up for my novel mailing list for new on future releases of the series!  You can also post questions about the novels there as well.   You may do that here:

Hope to hear from you!


I’ve been hard at work on my new urban fantasy novel series, The Archimage Wars.  This is a ten book series, the largest I have written to date, with my Cathexis series being next at 4 novels, and my NexLord series 3.  Because I knew this new series was going to be even larger, I decided to get well into the story before I started publishing any of the novels.  This way, if I decided to change something about how the magic system, etc. worked, I could still make changes to the earlier books. 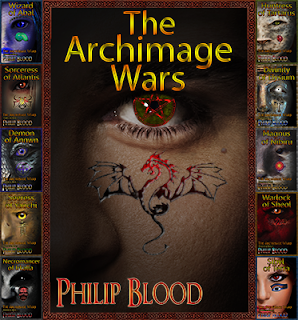 Well, I’ve completed the first three novels and am well into the forth, so at this point, I’m pretty confident that I have the worlds, their history, and the magic system, etc. all set.  So, I’m finally getting ready to publish Book 1 of the series, Wizard of Abal.

However, there is more!  I’ve also been producing my first audio play, book 1 of The Archimage Wars series!   I chose to do this as an audio play, rather than an audiobook, even though that is a LOT more work.  To accomplish this, I used voice actors to play all the lead roles of the story, and I also layered in some sound effects where appropriate.


Both the written version and audio play are currently going through final editing, and Wizard of Abal should be available to read or listen to, in May 2016.


Keep an eye out at my website, www.philipblood.com, for news on the release, as well as links to where they can be purchased.


Oh, and I’d love you to contact me through there and join my mailing list.  Just use the contact system at the website and ask to be added to my mailing list.  I’ll occasionally (not too often) email you a newsletter, with some insights on previous books, news on new ones, and even some giveaways!  (Free stuff is always good!).   Anyone who signs up for the newsletter soon will get a free copy of book 1, Wizard of Abal!


Also, if you email me with questions from www.philipblood.com, I may also include your question and the answer in that monthly(ish) newsletter!


Anyway, The Archimage Wars series is coming, I hope you enjoy book one, The Wizard of Abal!