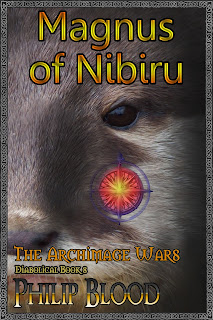 This is the eighth novel in The Archimage Wars series.  Frankly, it was the one I was dreading writing the most of all ten in the series, right after worrying about Divinity of Elysium.  This was for a couple of reasons.  Firstly, both Divinity of Elysium and Magnus of Nibiru were in that 70-80% of the overall story area.  This is always the hardest part of a story for me.  The early parts always flow easily, and once I get into the last 20%, I can really fly.  But, that other part, well, it can be a slog.  Secondly, Divinity of Elysium took place in a religious world, I thought that wild adventures might be hard to pen.  I was wrong, things went very well in that book.  Then I was facing a world based on hedonists, Nibiru.  How was I going to handle a bunch of booze-drinking, drug-consuming, furry animals and make it into an engaging part of the adventure?  It worried me.  However, I had no choice, since (due to my sister and her damn ideas) I am basing each novel in The Archimage Series on one of the ten worlds... so ten worlds, ten novels.  Note that, originally, I thought this was going to be a trilogy until my sister heard there were ten worlds in the story.  Now, I didn't just stretch the story from three to ten books, I revamped it, adding a lot more so that there was material for ten books, not to mention, that in the three-book version, each novel would have been much larger (example, my zONE trilogy, where the books are 500, 1000, and 600 pages, respectively).  Books in The Archimage Wars are just over 300 in each case.

But I digress.  I was pleasantly surprised to find out that the Nibirians are a hoot, and there was plenty of intrigue and fun to be had on Nibiru.  It went much better than I hoped and I am pleased with the finished product.  Hopefully, you readers are as well.
Posted by Philip Blood Blog at 9:00 AM No comments: